Activities In The Reserve

Home » Living the reserve » Activities In The Reserve

In the protected area there are numerous paths of different lengths, suitable for everyone. A hike through the reserve also offers the opportunity to learn about the history of these places with numerous archaeological sites from prehistoric and Roman times, such as the remains of castles and Roman aqueducts, the church of S. Maria di Siaris - sv. Marija na Pečah, typical icehouses (jazere) built in the past to store winter ice, and the remains of old mills, which are common along the Rosandra - Glinščica stream.

You can find out more on our routes page or visit us in our Visitors' Centre.

The Giordano Cottur cycle and foot path is the only path for cycling and walking in the Reserve and is also unique inasmuch as it allows you to reach the unspoilt nature of the Val Rosandra - Dolina Glinščice Reserve from the centre of Trieste. It is an easy route, suitable for everyone, which can be covered by bike or on foot and which allows you to reach Kozina or stop at Bottazzo-Botač.

The route follows the line of the former Trieste - Hrpelje railway, which operated between 1887 and 1959 and was dismantled in 1966. The railway was built in only 20 months, employing 2,600 workers from 1885 to 1886 being paid for by the Austro-Hungarian government, and connected Trieste with the Transalpine railway line that connected Istria with Gorizia and then went up towards the heart of the then Austro-Hungarian Empire. Today, many of the original stations and railway structures, such as the tunnels hewn into the rock, have been preserved, although they are often used for other purposes, making the route an interesting one from the point of view of industrial archaeology.

In the period from November to March each year at the Sant’Antonio in Bosco-Boršt station up to 8 wagons of wine would be loaded each day. After World War I the wine trade ceased, but the traffic with Istria intensified, only later to become of no economic interest after World War II and the new international border.

In the Rosandra Valley - Dolina Glinščice there are more than 520 equipped routes that attract numerous climbers from all over the world, because they are also accessible in winter. The rock faces have been climbed by the most daring Trieste climbers since the beginning of the 20th century and who have been amongst the vanguard of modern mountaineering worldwide.

The rock faces of the Reserve are home to itineraries that satisfy all enthusiasts, from beginners taking their first steps on the rock, to expert climbers who can really stretch their skills to the utmost. The most famous rock face is undoubtedly the one above the village of Bagnoli, known as the Falesia dei Canarini (Canaries’ Crag) ; here the rock, which has been worked over thousands of years by the Rosandra - Glinščica stream, has slopes of almost 45° (6th classic grade of difficulty, 8th UIAA grade), thus requiring considerable physical effort. Some of the most beautiful sections are located on the walls along the route of the old via ferrata (Klettersteig) on the northern slopes of the valley, where the difficulty of the routes is often low and the beautiful view of the entire river makes climbing pleasant and relaxing. If you want to try climbing, don't miss the "Sentiero dell'Amicizia" (Friendship Path) (a footpath that starts from Bagnoli and, going into the valley, reaches the village of Beka, in Slovenia) to move among the rocky outcrops and walls, discovering the old rusty pitons or wooden wedges used in the past by great mountaineers such as Emilio Comici and Enzo Cozzolino.

Technical note: the routes are equipped in different styles. The sport routes (equipped according to international standards and therefore decidedly safe) are recognisable by the typical sparkling plates that run along the wall until they reach a rappel chain; the alpine routes, on the other hand, follow the more logical directions of the wall (cracks, dihedrals, edges) but are, although decidedly easier than the sport routes, almost completely unprotected, and therefore require experience and complete equipment.

The caves of the Rosandra Valley - Dolina Glinščice have their own special features, which can be of interest to various types of hikers, from the merely curious to serious cavers.

For adventurous hikers, there are underground routes of increasing difficulty, ranging from easy hikes in horizontal caves to descents into vertical caves, in which knowledge of rope progression techniques is essential.

For safety reasons it is compulsory to indicate the intention to visit a cave within the Reserve. If you do not return, we you will know where to send the Cave Rescue teams.

Access to some of the Reserve's caves, which are particularly concreted with delicate speleological particles, has been regulated in order to maintain the right microclimate inside.

Before visiting the caves, we suggest you contact the Speleological (Caving) Groups of the province of Trieste or the College of Speleological Guides of Friuli Venezia Giulia. 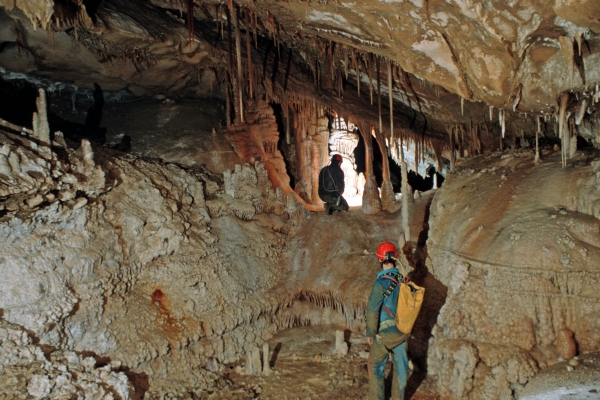